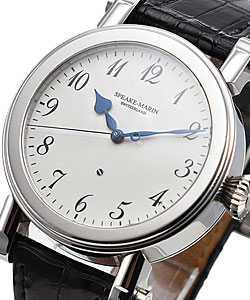 Peter Speake-Marin attended technical college in London, England and the School of Watchmaking WOSTEP in Neuchâtel, Switzerland. He went on to create complications for the Swiss watchmaker Renaud & Papi before founding his own company in 2002. The first watch, a tourbillon pocket watch made by hand called the Foundation Watch, established the company's style. Speake-Marin developed the first in-house calibers, a minute repeater tourbillon and a tourbillon, in 2012. That same year, Christelle Rosnoblet became CEO of the business. Soon after, Speake-Marin moved to develop and assemble movements in-house by investing in a workshop near La Chaux-de-Fonds. In 2017, Peter Speake-Marin left the company and the Rosnoblet Family assumed control. Speake-Marin moved its headquarters to Geneva in early 2019. Today, Speake-Marin is known for the independent development of complicated calibers and its fusion of traditional and contemporary elements.